We're excited to announce that the W' Canine Extreme Litter was born on August 4th, 2022. Both of the parents of this litter have incredible traits and characteristics, and we can't wait to see what has been passed on to them. We will be adding more information soon. Stay tuned!

The Sire to this litter is a stunning male named Team Marlboro Hilton. He is an extremely well-structured male with a masculine head, solid structure, and deep pigmentation. He has a solid work ethic and a nice temperament. Hilton is VA9 (BSZS'19) and also holds his IPO3 and KKL title. The father to Hilton is VA9 (BSZS'16) Yuri vom OSterberger-Land. Yuri is a stunning male, titled in IPO3, and he was a powerhouse at the German Sieger show. Yuri has a show-stopping look to him with great body structure and rich pigmentation. Yuri comes from a long line of World Champions (BSZS). His father is VA4 (BSZS) Mentos vom Osterberger-Land (SCHH3, KKL1) who is the son of VA (BSZS) Nando vom Gollerweiher. The list of top-quality and talented German Shepherds goes on and on from there.

The mother to this litter is a super female named Nova Canine Extreme. Nova has nice drives, pigmentation, and temperament. She loves working and has earned her SG rating, KKL, and IGP1 title. Her father is none other than our very own Fight vom Holtkämper Hof. Fight is rated VA2 (USA’17), V13 (BSZS’16), IPO3, and KKL. Fight is truly a phenomenal male with a solid work ethic and flawless character. Fight is known around the world for being a top producer of German Shepherds.The mother to Nova, Zariha vd Frieheit Westetholt, is titled V, IPO3 and KKL. Zariha is a beautiful female with rich pigmentation and a lovely body type. She is a very driven female with training and talent that really shows in her titles. Zariha is the daughter of the World Champion male VA3 Marlo von Baccara. 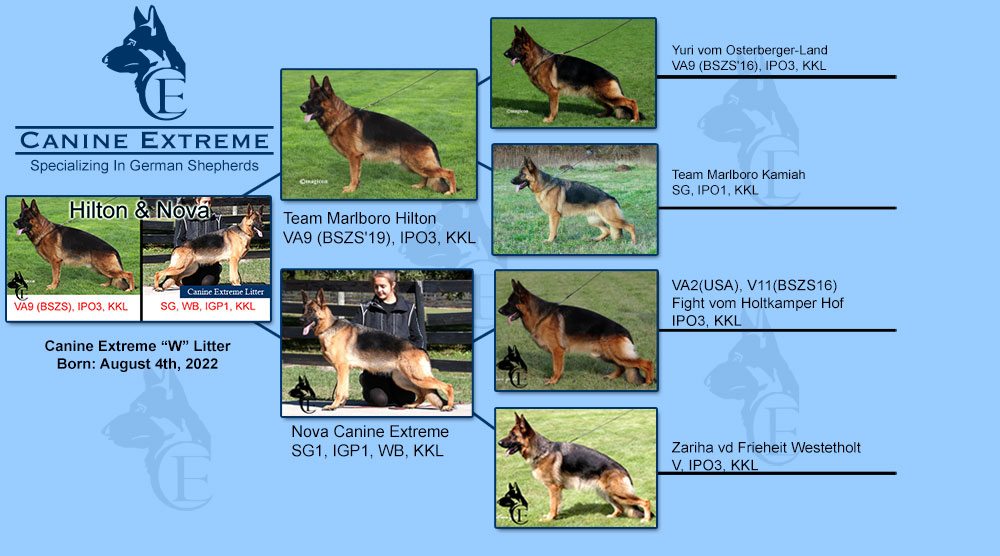