How To Read A Canine Extreme Pedigree

Reading a pedigree can be a daunting and even a confusing task at first. Rest assured, there is a pattern to the pedigree that once understood, it becomes much more straightforward. Knowing how to read the pedigree can provide you with valuable information on the dog and their lineage. You can find various information on a dog’s pedigree, such as names, parents, grandparents, date of birth, and titles. Below you will find a Canine Extreme pedigree that has been broken into sections to help read and understand a pedigree: 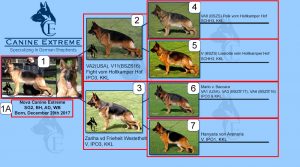 Box 1: Picture of the dog whos pedigree this belongs

This section of the pedigree, box 1 provides you with a picture of the dog who this pedigree belongs to. In this instance, we can see a stacked photo of Nova Canine Extreme on the left with a photo of her face on the right. This will be known as the main dog for this article.

In box 1A you can find the name, titles, and date of birth of the dog in the photo above. Here we can see that the dog’s name is Nova Canine Extreme. She holds her SG2 rating, BH, AD, and WB. We can also see that her date of birth is December 29th, 2017. This format is the same for all dogs on the pedigree, except only the date of birth will be shown for the main dog (box 1).

Box 2: Father to the main dog

Located in box 2 is the father to the main dog on the pedigree. This is the starting point of what is called the father’s line. When reading this pedigree, you would see that Nova’s father is Fight vom Holtkamper Hof who is located in this box. We can also see the titles that Fight holds which are VA2 (USA), V11 (BSZS16), IPO3, KKL.

Box 3: Mother to the main dog

Located in box 3 will be the mother to the main dog on the pedigree. Just like on number 2, this is the start of what is called the mother’s line. In this instance, we see that Zariha vd Frieheit Westetholt is the mother of Nova. Below Zariha’s name, we will see the titles that she has achieved which are V, IPO3 and KKL.

Box 4: Grandfather to the main dog on the father side

Box 5: Grandmother to the main dog on the father side

Box 6: Grandfather to the main dog on the mother side

In box 6, we can see the father to Zariha, who is also the grandfather to Nova on the mother’s side named Marlo von Baccara. As you work you way down the tree, you can see it goes Nova, Zariha and then Marlo. This means that box 6 is the location of the grandfather on the mothers side of the main dog in box 1.

Box 7: Grandmother to the main dog on the mother side

Common Questions When Getting A New German Shepherd Puppy

END_OF_DOCUMENT_TOKEN_TO_BE_REPLACED

Staying Cool In The Heat

Nothing says summer like sand between the paws, ice water by the pool, and walks in the sunshine. Summer is a time full of fun, adventures, and outdoor activities. While we all know how “cool” our dogs like to look over summer, like Kongo does while rocking his summer shades by the pool, it’s essential to remember to keep our dogs “cool” from the heat as well. Rest assured, while overheating and heatstroke are severe, with a bit of education and awareness of ways to keep cool, you and your pet can continue to enjoy all the fun activities that summer has to offer.