What do Hip and Elbow Ratings mean? 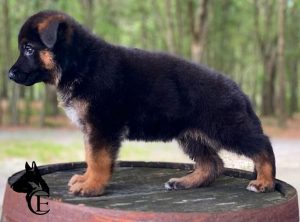 A common question that’s asked among new and returning german shepherd owners is, “What do the hip and elbow ratings mean?”. It can be beneficial to know and understand the hip and elbow ratings assigned to your dog and their parents. It’s also important to know that every dog is different and that even excellent hips and elbows should be taken care of as genetics only play a partial roll in the health of the hips and elbows over time. With that said, let us jump into the ratings to see how they’re rated and what they mean!

The Orthopedic Foundation for Animals does one of the most common ratings of hips and elbows for animals, also known as the OFA Rating. When the dog is one year old, their x-rays can be sent to receive a preliminary rating on their hips and elbows. Then when the dog is two years of age, they can be x-rayed to receive an OFA rating. This process is done by having an x-ray sent in and reviewed; a consensus of three independents will evaluate and certify them. Once the images have been reviewed, they will be given a rating such as excellent, Good, Fair, and Borderline. Below we break down the ratings directly from OFA in more detail.

The above information is the general ratings provided by the OFA. However, these ratings can be described by differing terms. Below you can find a table that shows some alternative names and terms for these ratings:

The more that we know about the development of the hips and elbows of a dog, the better we can help protect them. This is a wonderful example of how knowledge is power on the road to helping your dog achieve a good hip and elbow rating. As we know, genetics, diet, and environment play a vital role in hip and elbow development. However, the choice of spaying or neutering your dog can also have an impact. Check out this article Canine Extreme posted from a study by Trina Wood on when to Spay or Neuter your dog. Click below to read more!

Common Questions When Getting A New German Shepherd Puppy

END_OF_DOCUMENT_TOKEN_TO_BE_REPLACED

Staying Cool In The Heat

Nothing says summer like sand between the paws, ice water by the pool, and walks in the sunshine. Summer is a time full of fun, adventures, and outdoor activities. While we all know how “cool” our dogs like to look over summer, like Kongo does while rocking his summer shades by the pool, it’s essential to remember to keep our dogs “cool” from the heat as well. Rest assured, while overheating and heatstroke are severe, with a bit of education and awareness of ways to keep cool, you and your pet can continue to enjoy all the fun activities that summer has to offer.