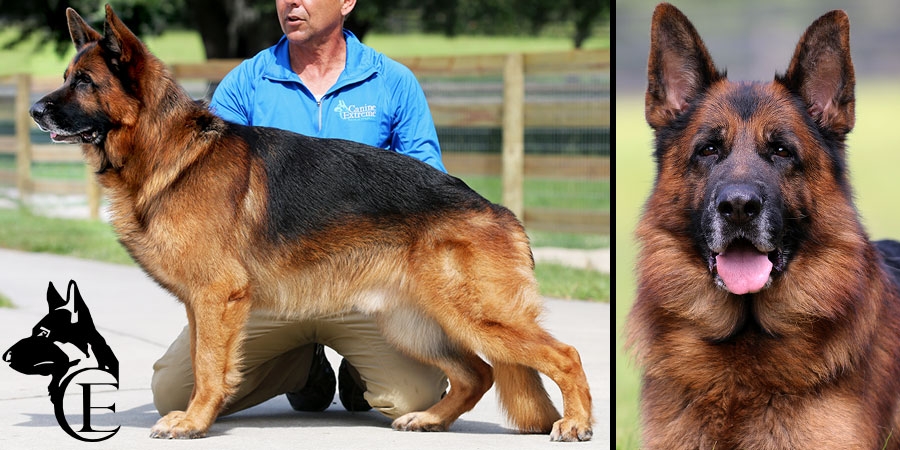 Aro is an outstanding German shepherd male who brightens up any room that he walked into. He possesses a masculine head, deep pigmentation, face expression and presence that gives off that "WOW" factor and turns heads. Aro has been an I catcher from the beginning claiming his SG title at the BSZS. He has subsequently gone on to achieve his VA (Mx) title as well as obtaining an additional V rating four times. When it comes to working, he undoubtedly is the full package holding his IPO2 and KKL. Aro loves to work and be a part of the group. The connection and attention that he shows make working with him become easy and second nature. Aro would fit seamlessly into a family and we look forward to what the future holds for him.

The father to Aro is an outstanding male named Desperados vom Pendler. Desperados is a stunning male who boasts a masculine head, a nice structure, and deep pigment. He holds his VA title and countless V ratings including a V rating at the BSZS in 2016. Desperados also loves to show off his working ability and has claimed his IPO3 title. He represents a delightful combination of looks and workability and this is a trait that we love to see passed onto his progeny. Atos aus Agrigento is the father of Desperados. You can see where some of the masculine features in Aro and Desperados come from. Atos also boasts power and masculinity as well as a deep pigmentation. He has respectfully claimed his VA title at the BSZS as well as earning V1 six times. The mother to Desperados is an outstanding female named Chakira vom Pendler. Chakira has the drives, structure, and pigmentation to stand toe to toe with her competition. She is a VA1 rated female at the BSZS in 2010 and holds an additional ten V1 titles. The combination of Atos and Chakira has produced a wonderful dog named Desperados, and he continues passing these traits along to his progeny.

The mother to Aro is Hera di Torre S.Carlo. Hera represents a beautiful female who has nice pigmentation and a sturdy structure. From a young age, Hera has stood out and she quickly claimed her SG title. Her angles, structure, and movement make her stand out in a crowd. The Father to Hera is a phenomenal male named Tony degli Achei. He holds his VA title in Italy and has earned an additional four V rating included one at the BSZS. Tony has a magnificent structure, expression, and an out of this world pigmentation. This is all accompanied by a solid work ethic and connection that has helped him achieve his schH3. The mother to Hera is a beautiful female named Daika vom Murrtal. Hera boasts wonderful angles and movements that have aided her earning her SG title and IPO1. Hera is a wonderful combination of two extraordinary parents and has produced progeny that continues to impress. 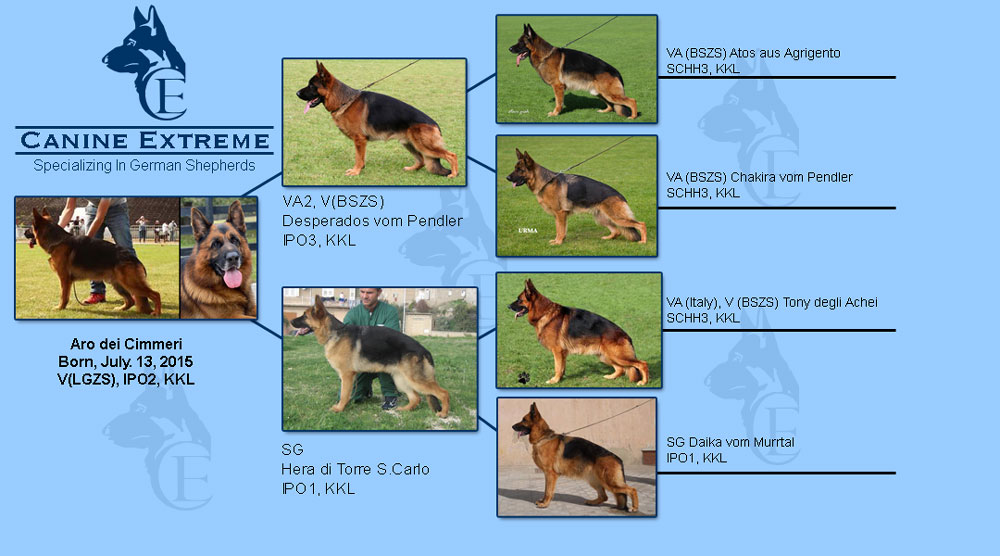