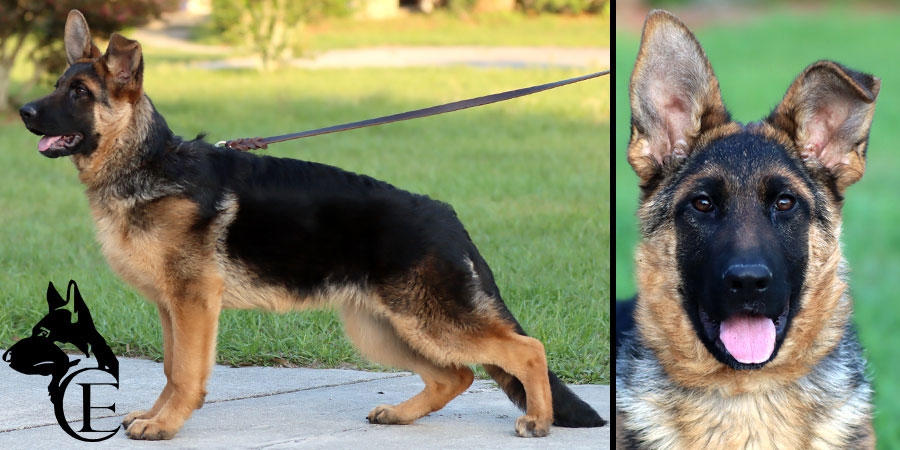 When it comes to a bright and magnetic personality, Delia is one of them. With an exciting, happy, and playful demeanor, she is an absolute joy to be around. She already shows caring attention and a great willingness to work. It is wonderful to watch Delia move as she plays and works showing off her developing movement and pigmentation. No matter what the task, Delia is more than happy to come along and give it her all. She continues to impress us daily, and we can't wait to see what she has in store for us!

The father of Delia is a stunning male naed Usher aus der Brunnenstraße. Usher is a well-structured male who has the color and movement to back it up. He also has a good work ethic that has helped him to earn his V rating as well as his IGP3 and KKL. His father is Willy vom Kuckucksland. When it comes to looks, angles, movement, and pigmentation, Willy is right there at the top. Over the years, he continues to not only climb in show rating but maintain and hold the VA1 (BSZS) rating in 2018 and 2019. This is all accompanied by an IPO3 and KKL rating. This pedigree goes on and on with Willys father being a phenomenal male named Opus, who is a VA-rated male, and it's absolutely no surprise when you look at his pedigree that is passed down his lines. His father is the 2X VA (BSZS) World Champion named Remo vom Fichtenschlag, who is titled in SCHH3 and KKL. Remo has sired many of our top males at Canine Extreme and is known for his pigmentation, character, and workability. Remo is a flashy dog when you watch him work!

Delia's mother is a beautiful female named Foggi vom Holtkämper Hof. Foggi has outstanding workability as well as great coloration and movement. She holds her V rating as well as her IGP3 and KKL titles. Her father is the incredible Henko vom Holtkämper Hof. Henko has extremely rich pigmentation, good character, and a top work ethic. He has a solid bone structure, good height, and a very dark mask with a beautiful expression in the face. Henko was highly rated in the youth class BSZS in 2016 and since then has been ranked VA 5 (BSZS'18,'19). Henko’s pedigree is one that is very close to home. His father is none other than our very own Fight vom Holtkämper Hof. Fight is rated VA2 (USA’17), V13 (BSZS’16), IPO3, and KKL. Fight is truly a phenomenal male with a solid work ethic and flawless character. Fight is known around the world for being a top producer of German Shepherds. In 2017 his son (ASAP v. Aldamar) was rated SG1 in the youth class of the World Championship (BSZS) and now holds the VA3 title at the BSZS. This is no surprise given the pedigree behind Fight and Henko including top names such as: Peik vom Holtkämper Hof (VA, SCHH3, KKL), Ilbo vom Holtkämper See (VA, SCHH3, IPO3, KKL), Negus vom Holtkämper See (VA, SCHH3, KKL), Flipp & Gandi con Arlett and many, many more. 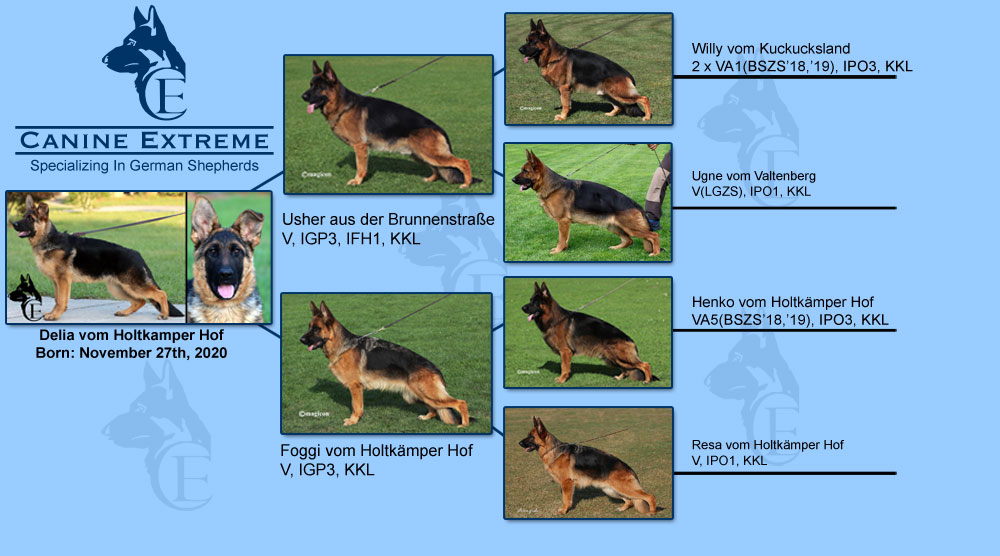