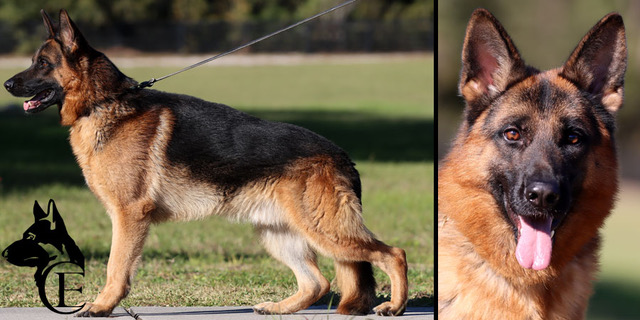 Fuerte was born in the USA on May 24th 2019 from two German imported parents Keule vom Holtkamper and Zariha v.d. Freiheit Westerholt! Fuerte is a beautiful male German shepherd who has a wonderful temperament and already enjoys working and learning. He has a masculine build, a large structure, and nice pigmentation. When he is not working and learning he enjoys to play and receive affection. We enjoy seeing the progress he has made and what can be accomplished.

The sire to Fuerte, Keule vom Holtkamper Hof, is the number one dog in the USA 2017 and is rated VA1, V11 (BSZS16), IPO3, KKL1. His titles and accomplishments are as impressive as they come and his pedigree is just as impressive. His father is World Champion male Pacco vom Langenbungert. Pacco is rated VA3 (BSZS’15), IPO3 & KKL. Pacco is a powerful male with deep red pigmentation, masculine body type and flawless work ethic. This top male was a showstopper in the ring and simply flawless to watch. Pacco is a wonderful representation of his bloodline and what good genetics can produce. His father, Remo vom Fichtenschlag, is a 2X VA1 (BSZS’11 &’12) World Champion and titled in SCHH3 & KKL. Pacco’s mother (Ankaa vom Nadelhaus) was a highly rated female at the 2011 BSZS, coming in at V19. The mother line to Keule begins with a well structured female named Rieke vom Holtkamper Hof who is the daughter to the world famous Zamp vom Thermodos. Zamp is a well built male with a solid body structure, good movement and phenomenal work ethic. Zamp was rated VA1 (BSZS’06), VA5 (BSZS’05) and holds titles in SCHH3 & KKL. One of the greatest aspects to Zamp, other then his show career, was his temperament with the family. This dog truly was the full package and has had a huge impact on what is expected of German Shepherds today.

The mother to Fuerte, Zariha v.d. Freshet Westerholt, is titled V, IPO3 and KKL. Zariha is a beautiful female with rich pigmentation and lovely body type. She is a very driven female with training and talent that really shows in her titles. Zariha is the daughter to the World Champion male VA3 Marlo von Baccara, Marlo is truly a top quality male and if he stunning presence isn’t enough his work ethic is just out of this world! Marlo loves to train and its his quality that really shines through in his bloodlines and progeny. Zariha’s mother line also comes from a long line of champions. Her mother, Hanyara von Arenaris, is the daughter to the 3XVA (BSZS & USA) World Champion Chacco von der Freshet Westerholt who is titles in SCHH3 and KKL. Zariha’s bloodline is truly filled with highly accomplished dogs on both the father and mother side. 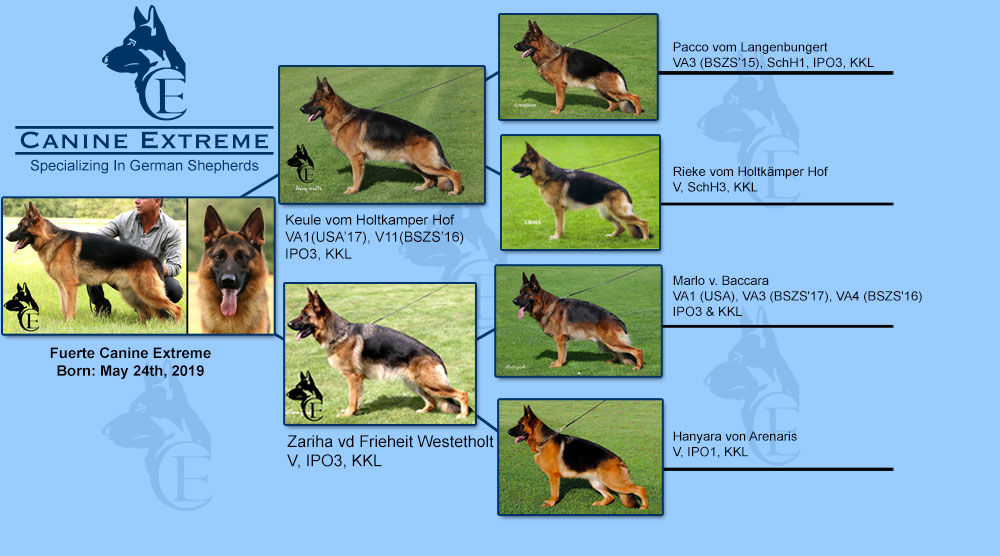