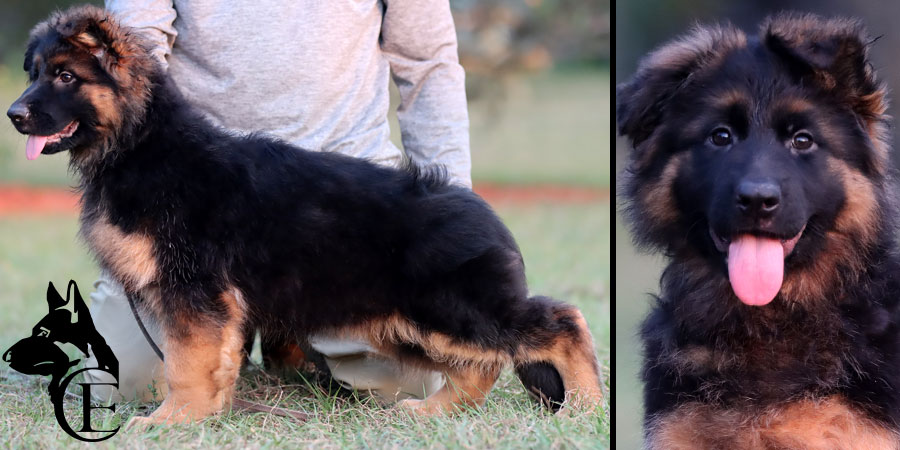 Ulkan von der Zenteiche is the father to this litter. Ulkan is an incredible up-and-coming male who has the titles, workability and looks to back it up. He has already gone on to achieve his V rating as well as his IGP2 and KKL. Ulkan has a masculine structure and powerful movement that make him stand out in a crowd. There is no doubt that these outstanding qualities partially come from his father, who is the incredible Willy vom Kuckucksland. Willy is a German Shepherd who is very well known in the German Shepherd World. He has achieved the peak of the show world, earning his VA1 rating two times at the BSZS in Germany. In addition to Willy's incredible pigmentation, structure, and movent is solid work ethic and drives. It is always incredible to watch Willy take the field, and he has achieved his IPO3 and KKL rating. Hadja von der Zenteiche is the mother of Ulkan and his a beautiful female. Hadja holds countless V ratings as well as her IPO1 and KKL.

The mother to this litter is a stunning female named Cookie vom Holtkämper Hof. From a young age, Cookie started to impress by earning her SG8 rating and has then gone on to earn her V1 rating as well as her IGP2 and KKL. The father of Cookie is an impeccable male named Henko vom Holtkämper Hof (VA 5, IPO3, KKL). Henko has extremely rich pigmentation, good character, and a top work ethic. He has a solid bone structure, good height, and a very dark mask with a beautiful expression on his face. Henko was highly rated in the youth class BSZS in 2016 and since then has been ranked VA 5 (BSZS'18,19'). The mother of Cookie is Vienchen vom Holtkämper Hof (V-BSZS, IPO3, KKL). Vienchen is a stunning female with a flawless body type, good color, strong bone structure, and good movement in the gait. She was VA10 (BSZS'18), V6 at the German Sieger, and 5X V1 at regional and local shows 9x SG1 as a young dog. 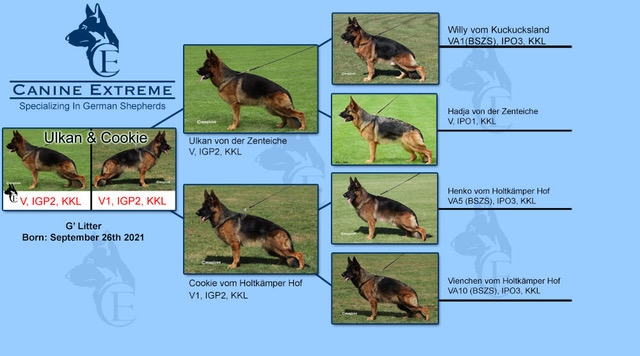