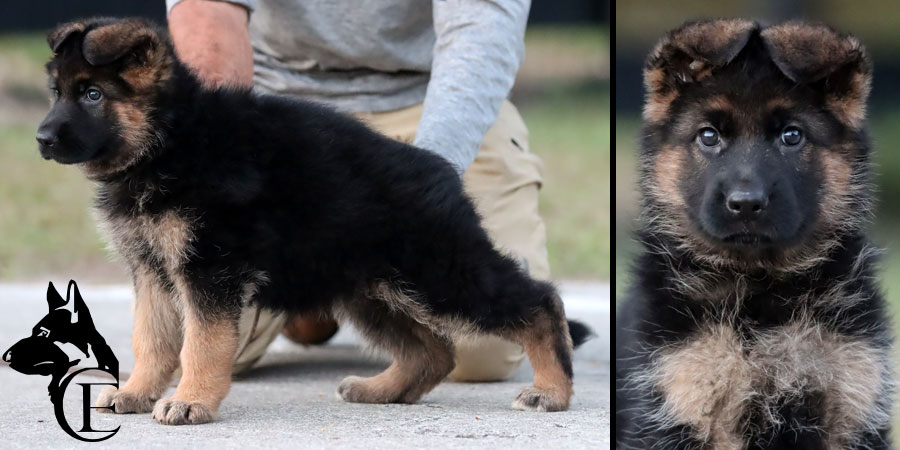 Image is the whole package when it comes to a combination of looks and temperament. She has a beautiful developing movement and excellent forming pigmentation. Image loves to be a part of the group and is always happy to learn new things. We can't wait to watch her grow up and see her turn into a picture-perfect Image.

The father to this litter is a phenomenal male named Massimo v. Aldamar. Massimo is an incredible male who has a well-developed structure and a deep pigmentation that lets him stand out in a crowd. He has a great presence that helped him to achieve his SG1 rating as well as his IGP1. This is all accompanied by an outstanding temperament that makes him a pleasure to be around. The father to Massimo is a super dog named ASAP vom Aldamar. ASAP is stunning red and black, who not only has phenomenal angles but carries incredible pigmentation. ASAP rated 1st place in the Young Dog Class at the World Championships (BSZS'17) and later took VA3 (BSZS'19) as an adult and has an IPO3 and KKL. The quality that this line has produced has pushed it to be one of the most sought-after bloodlines in the world. Ossy vom Suentelstein is the mother to Massimo. She has an incredible temperament that makes her a joy to work and be around. She has earned her V rating as well as her IPO1 and KKL. Her father is the World Champion male VA3 Marlo von Baccara. Marlo is truly a top-quality male, and if his stunning presence isn't enough, his work ethic is just out of this world! Marlo is a high-caliber German Shepherd that you can come across today. Marlo loves to train, and it's this quality that really shines through in his bloodlines and progeny.

The mother of this litter is an Imported German female named Soraya vom Holtkamper Hof (IPO1, KKL). She is the daughter to VA1(2017), V11 (BSZS) Keule vom Holtkamper Hof (IPO3, KKL), who was the number one dog in the USA in 2017. His titles and accomplishments are as impressive as they come, and his pedigree is just as remarkable. The father of Keule is a World Champion male, Pacco vom Langenbungert. Pacco is rated VA3 (BSZS'15), IPO3 & KKL. Pacco is a powerful male with a deep red pigmentation, masculine body type, and flawless work ethic, making him a showstopper in the ring and simply excellent to watch. Pacco is a beautiful representation of his bloodline and what good genetics can produce. His father is a 2X VA1 (BSZS'11 &'12) World Champion and titled in SCHH3 & KKL. Pacco's mother (Ankaa vom Nadelhaus) was a highly rated female at the 2011 BSZS, coming in at V19. The mother line to Keule begins with a well-structured female named Rieke vom Holtkamper Hof, the daughter of the world-famous Zamp vom Thermodos. Zamp is a well-built male with a solid body structure, good movement, and phenomenal work ethic. Zamp was rated VA1 (BSZS'06), VA5 (BSZS'05), and holds titles in SCHH3 & KKL. One of Zamp's most significant aspects to show, other than his show career, was his temperament with the family. This dog indeed was the full package and has had an enormous impact on what is expected of German Shepherds today.