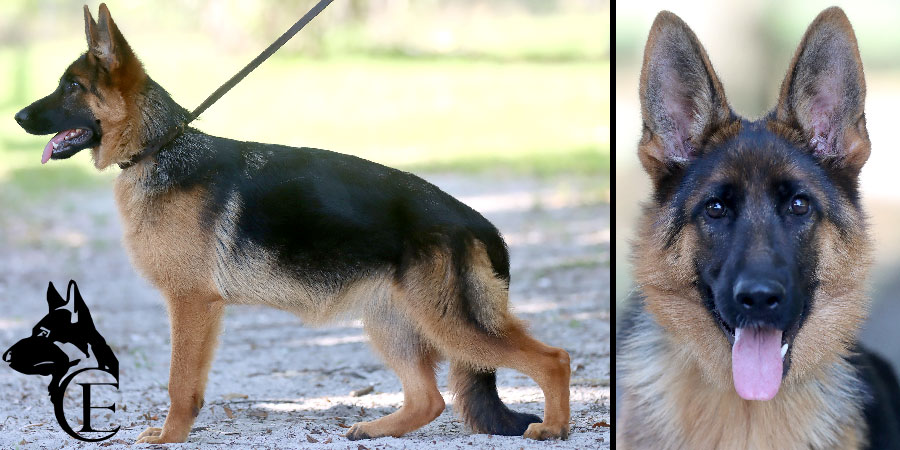 Kaily is a red & back show line German shepherd female. Kaily is an adorable puppy who has the brains to use her cuteness to melt any heart. She is easy to get along with and is always willing to learn new things. While on the farm, Kaily has been exposed to other dogs, horses, cats, and even some chickens and thinks everyone is already her best friend. She would be well suited for the show ring or hanging out with the family.

The father of this litter is an incredible male named Untox aus der Brunnenstraße. Untox is a masculine male with deep pigmentation and a well-developed structure. He has already gone on to achieve his V rating at the BSZS and his IGP3 and KKL. His father, who is the incredible Willy vom Kuckucksland. Willy is a German Shepherd who is very well known in the German Shepherd World. He has achieved the peak of the show world, earning his VA1 rating two times at the BSZS in Germany. In addition to Willy's incredible pigmentation, structure, and movent is solid work ethic and drives. It is always incredible to watch Willy take the field, and he has achieved his IPO3 and KKL rating. Ugne vom Valtenberg is the mother of Untox, and she is a beautiful female with a nice and fluid movement. This has helped her to earn her V(LGZS) rating and her IPO1.

Carina von Amun is the mother of this litter. Carina has rich pigmentation and a feminine structure. She is an up-and-coming female who earned IGP2 and her first V rating in 2021 and has a bright future for more. The father of Carina is an impeccable male named Henko vom Holtkämper Hof (VA 5, IPO3, KKL). Henko has extremely rich pigmentation, good character, and a top work ethic. He has a solid bone structure, good height, and a very dark mask with a beautiful expression on his face. Henko was highly rated in the youth class BSZS in 2016 and since then has been ranked VA 5 (BSZS'18,19'). The mother of Carina is Karina vom Overledingerland (V, IPO3, KKL). Karina started to compete at a young age and quickly claimed three first-place rankings and then her first V rating. These traits are passed down to her progeny as three of her descendants have also earned their V ratings.