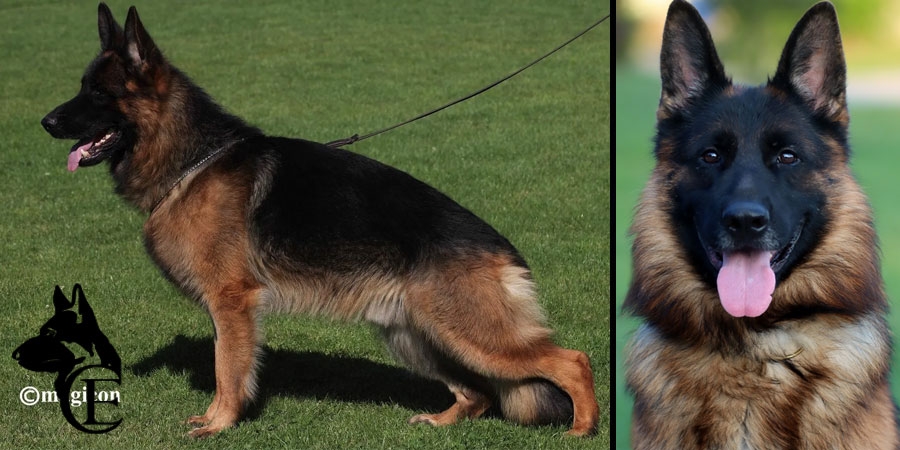 Massimo is a masculine German shepherd who is the full package. Massimo has a well-developed structure and a deep pigmentation that lets him stand out in a crowd. The first time you see him you can clearly see why he holds his SG 1 rating as well as his IGP1 and KKL. To top off his good looks and workability, he has a great temperament that makes him a joy to be around. No matter the task at hand, he is happy to give it his all and have a great time while doing it. We're so excited to see what the future has in store for him!

The father to Massimo is a super dog named ASAP vom Aldamar. ASAP is stunning red and black who not only has phenomenal angles but carries incredible pigmentation. ASAP rated 1st place in the Young Dog Class at the World Championships (BSZS'17) and later took VA3 (BSZS'19) as an adult as well as having an IPO3 and KKL. The quality that this line has produced has pushed it to be one of the most sought-after bloodlines in the world. His father is our very own Fight vom Holtkamper Hof who is titled VA2 (USA'17), V13 (BSZS'13), IPO3, KKL. Fights father is a top male named Peik vom Holtkamper Hof. Peik is a World Champion male from Germany who is titled in VA (BSZS, B & USA), SCHH3, and KKL. He has strong drives to work and a very nice overall body type. Peik is the son of a 2X VA champion named Ilbo vom Holtkamper See. Ilbo rated VA2 (N), VA4 (BSZS), IPO3, SCHH3, and KKL. Ilbo has a very square body type, a nicely built chest, and a good even pull in the back. Ilbo has a masculine head structure and nice pigmentation.

The mother to Massimo is a beautiful female named Ossy vom Suentelstein. She has an incredible temperament that makes her a joy to work and be around. She has earned her V rating as well as her IPO1 and KKL. Her father is the World Champion male VA3 Marlo von Baccara. Marlo is truly a top-quality male, and if his stunning presence isn't enough, his work ethic is just out of this world! Marlo is a high-caliber German Shepherd that you can come across today. Marlo loves to train, and it's this quality that really shines through in his bloodlines and progeny. His sire is Roy Terrae Lupiae, who was an impressive male rated VA2 (Italy'10), V12 (BSZS'10), SCHH3 & KKL. Roy comes from a powerhouse pedigree filled with German champions and top-rated dogs. 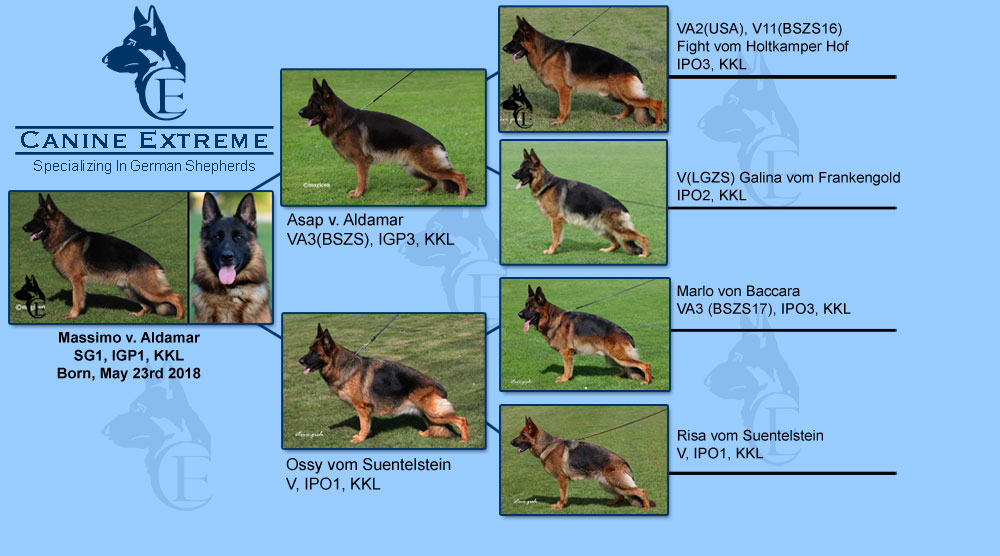