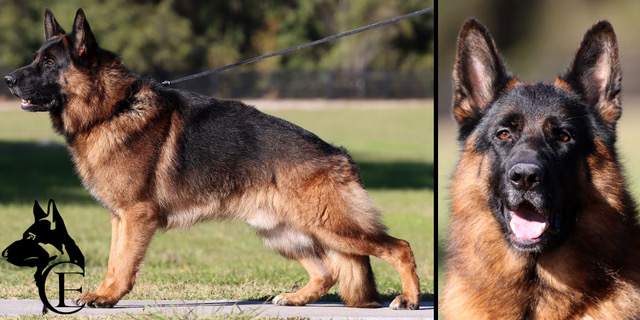 Ober vom Holtkämper Hof is a incredible male German Shepherd. He has a masculine structure and powerful movement. This is all accompanied by great pigmentation and a well-developed structure. Ober has a cool temperament and loves attention and being a part of the group. While he enjoys relaxing, he gives it his all when it's time to work. Ober has achieved his V rating as well as his IGP3 and KKL. He has a bright future and continues to impress us as the years go on.

The sire to of Ober is a stunning male named Uno vom Tonsbrock, and he is V, IPO3, KKL. Uno is an impressive male with rich pigmentation, good movement in his gate, and expression on his face. He is fun to watch and shows a tremendous work ethic as well. His sire, Taifun vom St.-Michaels-Berg, was VA4 (USA’16), V31 (BSZS’16) and titled in IPO3 & KKL. Taifun is a top-quality male and is well known for his genetics and pedigree. His sire, Leo von der Zenteiche was VA2 (BEL’15), IPO3 and KKL. Leo is the son to the world-famous Furbo degli Achei VA(BSZS), SCHH3, IPO2, KKL. Furbo was just stunning to see in person. He had rich pigmentation, a good work ethic, and flawless movement. Uno’s pedigree is filled with top dogs from Germany, such as VA Quenn vom Löher Weg (SCHH3, IPO3, FH1), VA Jeck vom Noricum (SCHH3, FH), and many others.

Emily vom Holtkämper Hof is the mother of Ober and is a beautiful female with a great structure and movement. Emily has gone on to achieve her V rating as well as her IPO1 and KKL. Emily comes from an incredible line of shepherds, with her father being Fight vom Holtkamper Hof. Fight is titled VA2 (USA17), V13 (BSZS13), IPO3, KKL. Fight is just a phenomenal dog, and with his son (ASAP vom Aldamar) coming in 1st place in the Young Dog Class at the World Championships (BSZS17), he is currently one of the most sought-after pedigree’s in the USA. Fights father is a top male named Peik vom Holtkamper Hof. Peik is a World Champion male from Germany who is titled in VA (BSZS, B & USA), SCHH3, and KKL. He has a strong drive to work and a very nice overall body type. 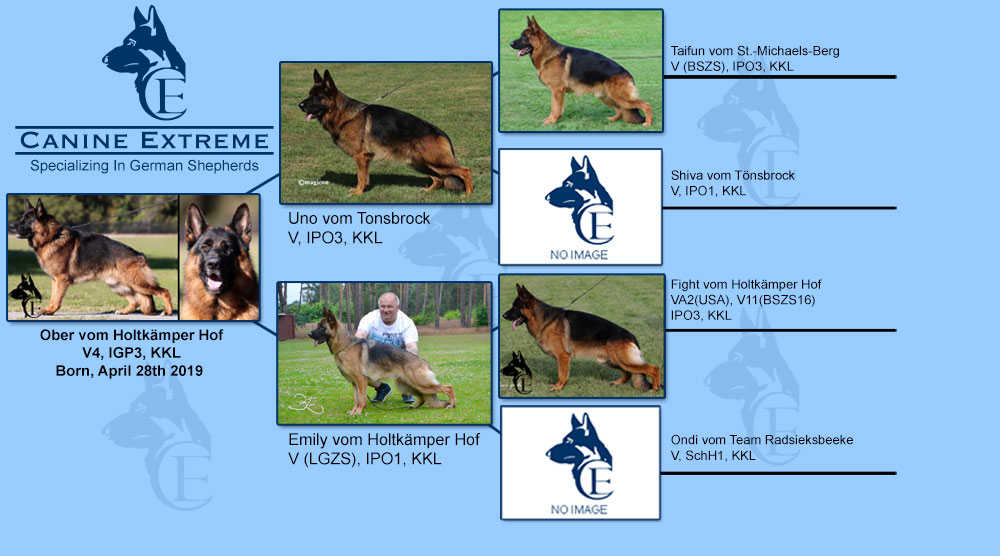