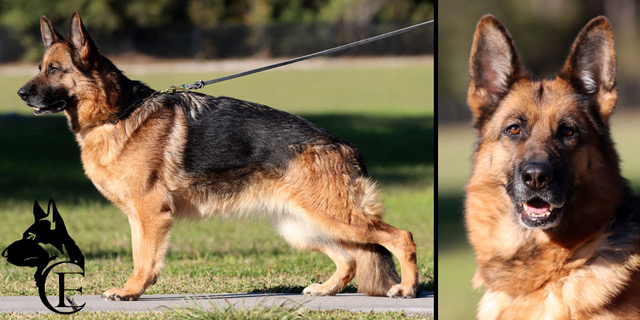 Gracy is a phenomenal female german shepherd. She has outstanding angles, pigmentation, and temperament while still maintaining a nice work drive. She loves to play, work, and to be a part of the group. She is the mother to a few up and coming V rated german shepherds right now. We all look forward to not only what she can accomplish but the success of the progeny she has created.

The sire to Gracy, Fight vom Holtkamper Hof, is titled VA2 (USA17), V13 (BSZS13), IPO3, KKL. Fight is just a phenomenal dog and with his son (ASAP vom Aldamar) coming in 1st place in the Young Dog Class at the World Championships (BSZS17) he is currently one of the most sought after pedigree’s in the USA. Fights father is a top male named Peik vom Holtkamper Hof. Peik is a World Champion male from Germany who is titled in VA (BSZS, B & USA), SCHH3 and KKL. He has strong drives to work and very nice overall body type. Peik is the son of a 2X VA champion named Ilbo vom Holtkamper See. Ilbo rated VA2 (N), VA4 (BSZS), IPO3, SCHH3 and KKL. Ilbo has a very square body type, nicely built chest and good even pull in the back. Ilbo has a masculine head structure and nice pigmentation. Fight's father line is really known for power, size and workability. The mother line to Fight is built from classic German Shepherds out of Germany with nice body style and color. Fight’s mother is Liselotte vom Holtkamper Hof who is V rated (BSZS’11) and titled in SCHH3.

The mother to Gracy is an outstanding female named Amanda vom Reeshoop. Amanda is a stunning female with nice angulations pigmentation. She is a V rated female who also holds her IPO1 title as well as her KKL. Zony von Haus Gerstenberg is the father of Amanda. Zony holds his V rating from the BSZS and boasts outstanding pigmentation, a nice masculine head structure, and angulation. Zony has received a total of 9 V ratings and holds his working SchH3 title. He has been known to pass along some of these traits as 9 of his progeny have taken a V rating. Amanda's mother is Uschka vom Reeshoop. Uschka is a V rated female and holds her SchH1 and KKL. She is a female with nice pigmentation and fluid movement. 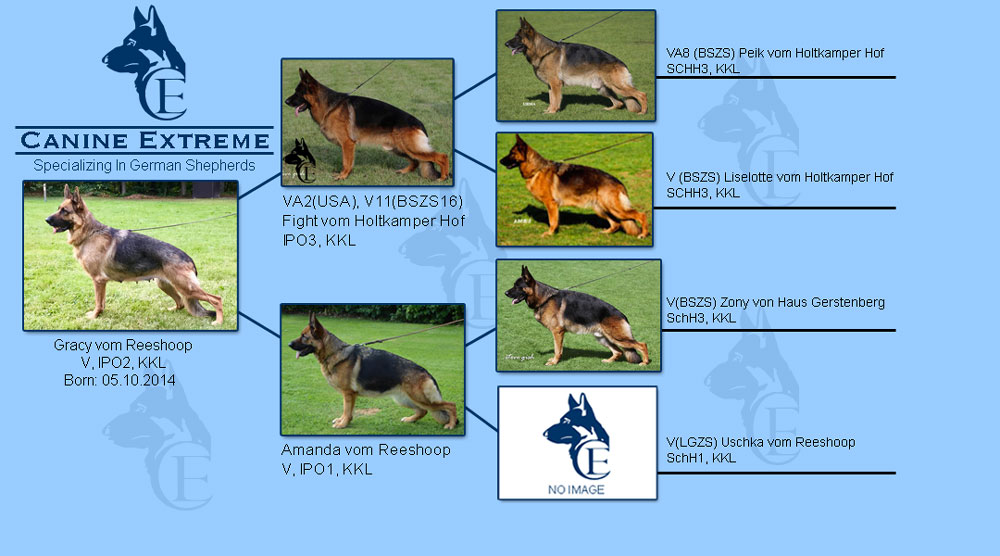