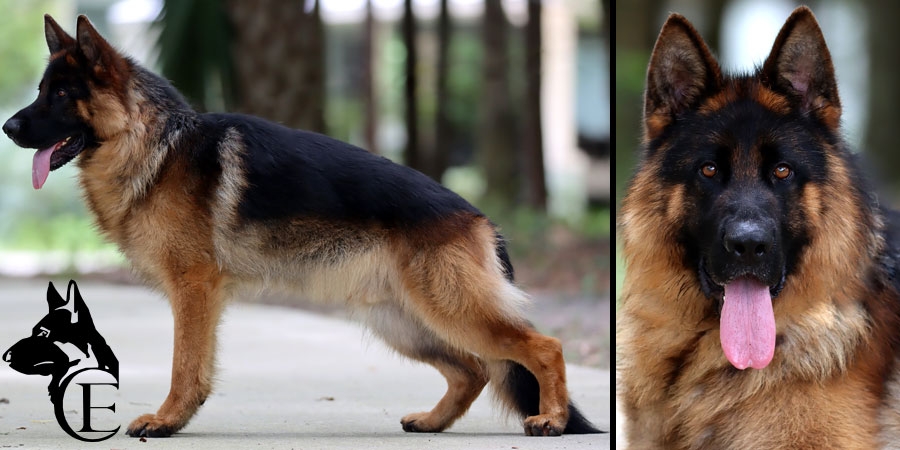 Silas is a male German shepherd who loves to show off his incredible angles, movement, and well-defined structure. From a young age, you could see that Silas had the potential to stand a step above the rest, and he has not disappointed. In his first show, Silas placed at the top, earning his SG 4 ratings. He has then gone on to earn his IGP 1 rating, proving that he has the brains to match the look. To top off his already incredible looks and intelligence, he also has a top-notch temperament to go along with it. No matter the task, Silas is always happy and more than willing to join in. There is no limit to what Silas can do, and we look forest to seeing what he can accomplish.

The father to Silas the incredible Henko vom Holtkämper Hof. Henko has extremely rich pigmentation, good character, and a top work ethic. He has a solid bone structure, good height, and a very dark mask with a beautiful expression on his face. Henko was highly rated in the youth class BSZS in 2016 and since then has been ranked VA 5 (BSZS'18, '19). Henko's pedigree is one that is very close to home. His father is none other than our very own Fight vom Holtkämper Hof. Fight is rated VA2 (USA'17), V13 (BSZS'16), IPO3, and KKL. Fight is truly a phenomenal male with a solid work ethic and flawless character. Fight is known around the world for being a top producer of German Shepherds. In 2017 his son (ASAP v. Aldamar) was rated SG1 in the World Championship (BSZS) youth class and now holds the VA3 title at the BSZS. This is no surprise given the pedigree behind Fight and Henko including top names such as: Peik vom Holtkämper Hof (VA, SCHH3, KKL), Ilbo vom Holtkämper See (VA, SCHH3, IPO3, KKL), Negus vom Holtkämper See (VA, SCHH3, KKL), Flipp & Gandi con Arlett and many, many more.

Ola von Stadt Spenge is the mother to Silas. From an early age, Ola has entered the competition field and gave it her all. She claimed countless SG titles and then went on to earn five consecutive V ratings. This is accompanied by an IPO2 rating as well as her KKL. The father of Ola is a masculine male named Conbhairean Uno. Conbhairean is an incredible male who can't help but have a commanding presence in the room. He has a large and well-defined structure, powerful movement, and great workability. Once you meet Conbhairean, you can see why he earned his V rating as the BSZS in 2013, as well as his SchH3 and KKL. The mother to Ola is, Kuna vom Patersweg. Kuna is a beautiful female German shepherd who has earned countless ratings. She holds her V rating at the BSZS as well as her SchH2. Kuna has deep pigmentation, a feminine structure, as well as fluid movement. 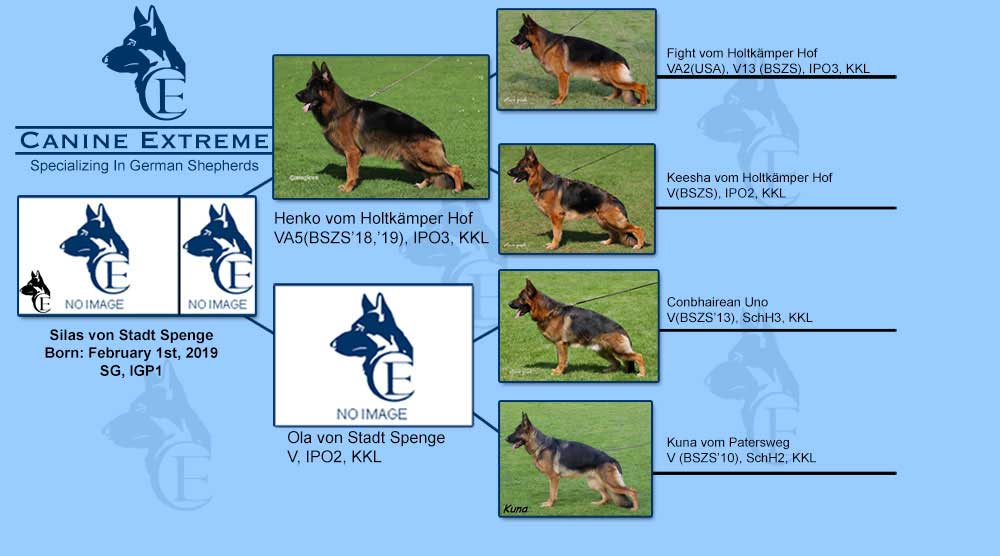